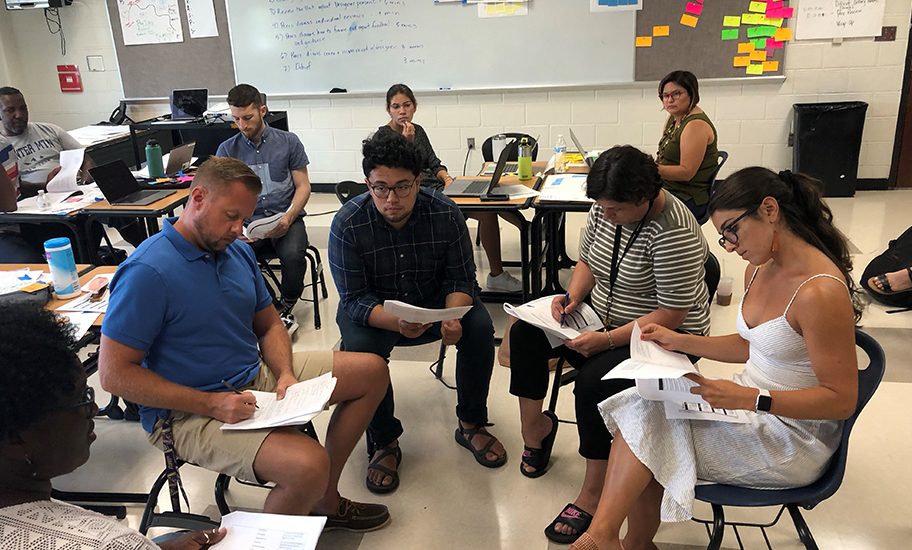 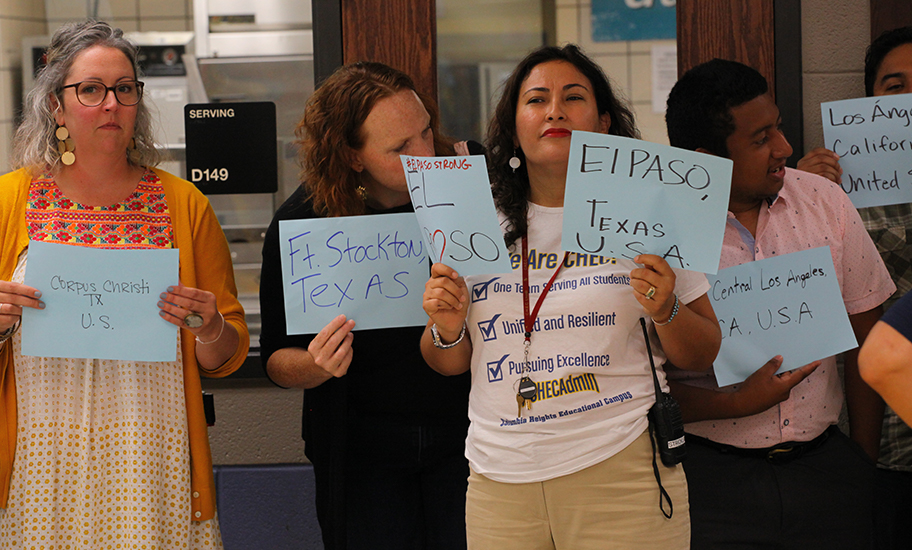 PROUD TEXANS AT WELCOME BACK DAY
The first week of instruction is the time to set the stage for the Advisory by investing students in the plan for their learning. As discussed previously, community building is important throughout the year, but particularly the first week.  Course diagnostics are also an important part of the first week, and students should be encouraged to try their best, so that we have good information on what they know and what they still don’t know.  Results of diagnostics should be shared with students, since this forms the baseline for their Path of Progress (POP) sheet, and their process of monitoring their own growth.
There is also a more collaborative way we use to assess students background knowledge, which consists of sharing and discussing the Big Idea Template for the unit with students,  so they can read it and share what they may already know, what they find interesting, what they find  confusing, and what they want more information about.  Reviewing the Big Idea Template for the unit with students is actually an assessment that will provide the teacher with great information on how to sequence the content, and how to differentiate with and for students.  Following the review of the Big Idea Template, teachers share the GRASPS with students, and engage in a similar discussion and planning exercise. This will build student excitement and motivation to complete the project.
Starting off the year with formative assessments that students can analyze with you, will build a powerful partnership for learning!
INSTRUCTIONAL CALENDAR
The Instructional Calendar is a living document that houses all of the major curricular requirements, assessments, and schoolwide events.  Please check it weekly, as it changes as events are added or moved. The calendar is curated by members of the Admin team, and Mr. Magee, Science LEAP lead, curates and adds events or items that are submitted by Department Chairs.  If you have an event or item that you think should be added to the Instructional Calendar, please submit it to your Department Chairperson first, and then your Department Chair will submit for inclusion if appropriate.
Please view the Instructional Calendar here
OPPORTUNITIES: 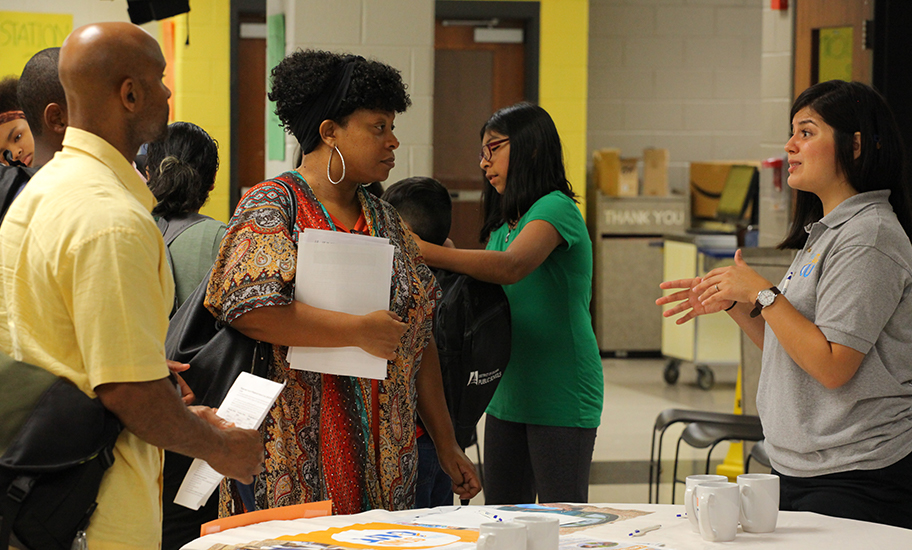 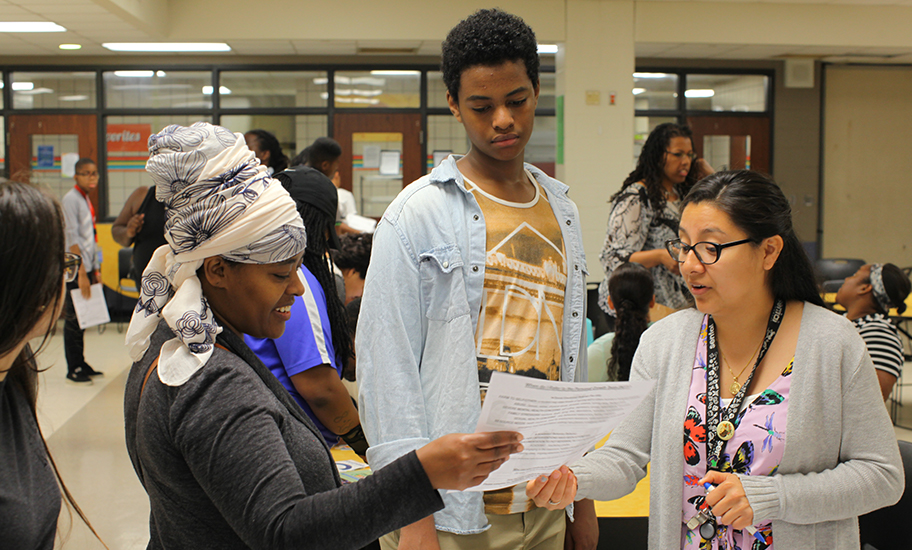 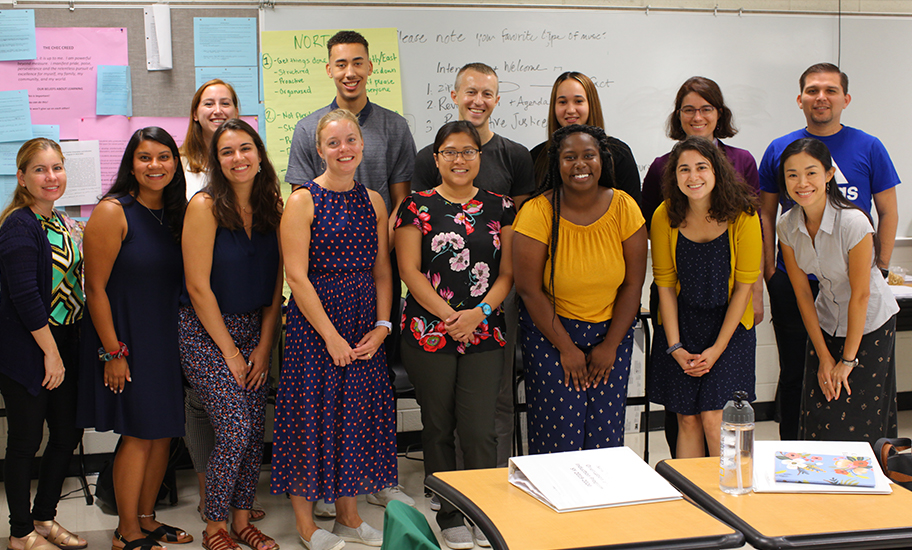 CHEC NEW TEACHERS FOR SY 2019-20
REMINDERS
Students that are Out-of-Area
During the past school year, we noticed a pattern of middle and high school students wandering into the wrong school. For this new year, please be mindful that Middle School students should not be in the High School at all, and certainly not without a pass. High School students should only be in the Middle School on the Lincoln 3rd floor. The route for High School students to the 3rd floor Lincoln is through the Bell 2nd floor and on to Lincoln 2nd floor landing and up the stairs to the 3rd floor.  They should not use the 1st or 2nd floor Lincoln to get to the 3rd floor Lincoln. Students that are not complying should be written a referral, so they can earn a consequence.
Detention
Detention is a first intervention we have for students to check and correct their behavior in your classrooms. Students being informed of this consequence is vital to the effectiveness of the consequence.  Remember to use our 5 step process with fidelity so that our students will not earn a greater consequence of ISS and thus lose valuable class time
Dismissal
We always need more support at dismissal from 3:15pm until 3:35pm (High School), 4:15pm until 4:35pm (Middle School). Please follow students all the way out to the front of the building. Students should be encouraged to move on toward their bus stops/metro quickly. Teachers and staff that can make themselves available to stay out front will be greatly appreciated.
Cafeteria Support
All lunches have their ups and their downs. We always appreciate additional supports in the cafeteria on days that teachers are available. Check-ins with students build relationships and adult presence supports our daily procedures in lunch.
WEEKLY SPORTS UPDATE
Athletics are an integral part of the educational program and a means to accomplish the goals of education. Our athletic program exists for the welfare of students and the contributions it makes to their educational experience.  Athletic participation builds self-esteem and confidence and provides the necessary tools for success.  The interaction between individuals on the fields of sport teaches students the value of teamwork, while developing the proper competitive spirit, combined with a sense of fairness.
GRIFFINS GEARING UP TO DEFEND DCSAA CLASS A FOOTBALL CHAMPIONSHIP
The Northwest Courier/Tadi Abedje
August 16, 2019 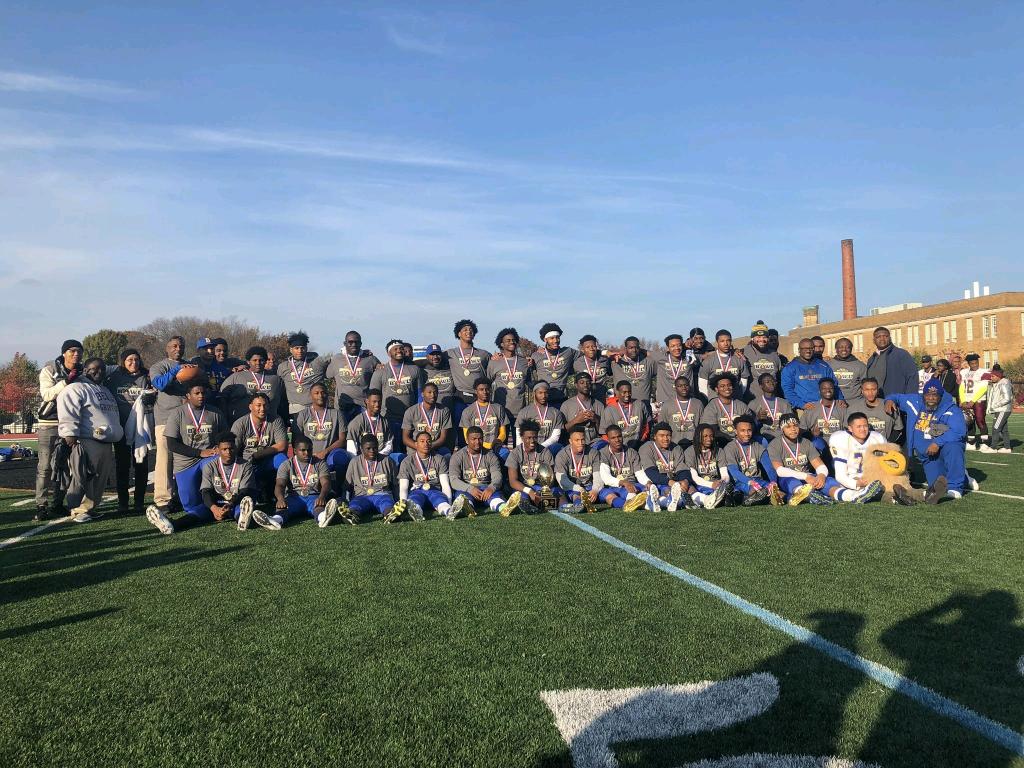 The Bell Multicultural Griffins’ high school football team capped off a successful 2018 campaign by capturing the D.C. State Athletic Association Class A title. It was their sixth consecutive season of being in the championship game. After finishing with an 11-0 record last year, what are the Griffins’ goal heading into 2019? Well, if you ask head coach Daniel Tyson, the goal is to repeat.
“We’re really focused on putting this team in the right position to have the possibility of actually repeating,” Tyson said. “It’s always been our goal to get up to the Stars division. The only way to do that is to win two championships in a row. We’ve been super focused on doing things the right way and preparing this team to do the same thing that last year’s team did.”
But this team will look different this season. About 20 seniors graduated after last season — including key players like Jeremiah Richardson, Rashaad Harris, and Ronnell St. John.
“It’s always a big deal when you lose that many seniors. But the other challenge is you don’t know what the strength of your team is coming in. It’s going to take us some time to figure that out and [put] people in the right position,” Tyson said.
Another challenge is that every team in the Stripes division has gotten better. The Ron Brown Monarchs are experienced, with a majority of their roster filled with seniors. The Coolidge Colts are primed to improve this season, especially since they hired Kingsman Academy’s Kevin Nesbitt as their head coach. Anacostia is building a really good program, which is led by experienced head coach Jason Lane. Isiah Harris will be taking over as head coach of the Phelps Panthers, after leading the Cardoza Clarks to the playoffs two years ago.
The Griffins are looking forward to senior offensive lineman Eric Wells and linebacker Elijah Childs, who were first-team all-DCIAA last season, to step up this season. Fans should also keep an eye on freshman quarterback Zion Peers, Tybias Barton, and Martell West in 2019. Those players are expected to make an impact this year.
Tyson wants his players to embody the five traits that make a Griffin football player: coachable, loves to practice, team-first attitude, dominates the competition, and self-discipline.
“When I have issues with their performance, I always go back to those traits,” Tyson said. “We have some games where we go over what are some of the characteristics to keep them up to speed of what it looks like. “A lot of it is a culture shock for these ninth and tenth graders. They’ve never been in a part of a program where I’m asking them to think these are the characteristics I want you to display every single day.
So it’s an ongoing process and conversation around making sure they display it.”
Tyson also raved about his coaching staff — saying he believes the “unbelievable group of coaches” they have will prepare the players really well.
“So when we lose players, it’s the next player up. And it’s about coaching and developing them to see what they do best. I feel really confident in this group, even though it’s a younger group. I feel extremely confident in the coaches preparing and getting them in the right position,” said Tyson.
Childs, a team captain, echoed his coach’s sentiments. “Coach Tyson is a hard-working coach, and he devotes most of his time to our team even though he has his family. He pushes us and even though we may not always like his message, he always wants the best for us. He’s a coach who wants us to look at the bigger picture beyond football,” said Childs.
For their first game of the season, the Griffins will travel to Ballou High School to take on the Ballou Knights on Friday, August 30, at 6 p.m.
LAST WEEK'S RESULTS
N/A
LINCOLN
BELL
THIS WEEK'S SCHEDULE
Monday the 26th
No Games
Tuesday the 27th
High School Girls Soccer – vs. District of Columbia International – at CHEC Field at 4:00 p.m.
Wednesday the 28th
No Games
Thursday the 29th
No Games
Friday the 30th
Bell Boys Soccer – vs. Washington International at Washington International at 4:00 p.m.
Bell High School Football – vs. Ballou at Ballou at 6:00 p.m.
Saturday the 31st
No Games
Back to content